This project was conceived as thesis for my B.A. in Performing Arts. It was designed to investigate how the individual is formed by its surroundings. How does the "Other" participate in the creation of the "I"? How are they similar and how are they different? Are the boundaries clear? All procedures and performances take place on campus at PUC-Rio, Rio de Janeiro, Brazil.
Procedure no.1: Architecture
Gabriela tried to become part of the architecture of the "Edificio da Amizade" (literally, "Friendship Building"), also known as the building Kennedy/Frings. The action had been idealized to last for 16 hours and in reality took 2 hours and 15 minutes.
Procedure no.2: Movement
On October 11th, 2011, Gabriela crossed the ground floor of the "Edificio da Amizade" (literally, "Friendship Building"), also known as the building Kennedy/Frings, as slowly and fluidly as she could manage. The idea was to create an experience of space and time different from that of daily life. The action had been idealized to last for 6 hours but in reality took 3 hours and 30 minutes.
Procedure no.3: Sound
On November 7th, 2011, Gabriela attempted to become a channel for sound, receptor and emitter, input and output. She wandered blindfolded through the PUC-Rio campus, listening to its soundscape and producing sounds reflectively on impulse.
Procedure no. 4: Agave
On November 11th, 2011, Gabriela attended class at PUC-Rio dressed as Agave, Euripides' character in The Bacchae that has become associated to the performer throughout her school years.
Procedure no. 5: Ophelia was banned by the Dean because of health issues. I did it anyway, but as the short film "Queen River".
Procedure no.6: Through the Looking Glass
On October 13th, 2011, Gabriela modeled for a "Figure Drawing Class" at PUC-Rio. The drawings were generously donated to her by the students. The idea was to translate onto paper the relationship between how identity is shown and how it is read.
Final Performance: 4320
4320 is what results when you multiply the number of sides by the sum of the angles of a hexagon. The last action of "6 procedures and 1 performance" ended up being an installation. A hexagonal chamber, with one door, covered in mirrors with two openings big enough for faces and two soundtracks to listen to.
Collaborations for this piece - Sound Art: Alexandre Bräutigam; Memories written on a body: Pequenos monumentos da memória; Cubotopia with adhesive tape: Bili Gebara; Architectural assistance and photographs: Antonio Pedro Coutinho (Doca); 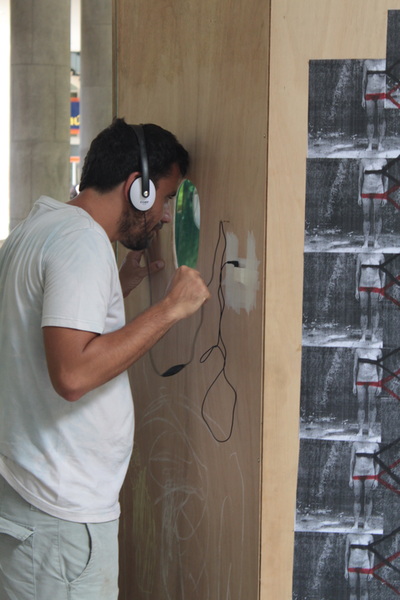 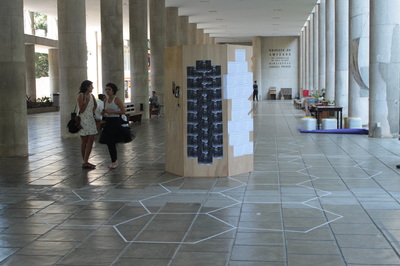 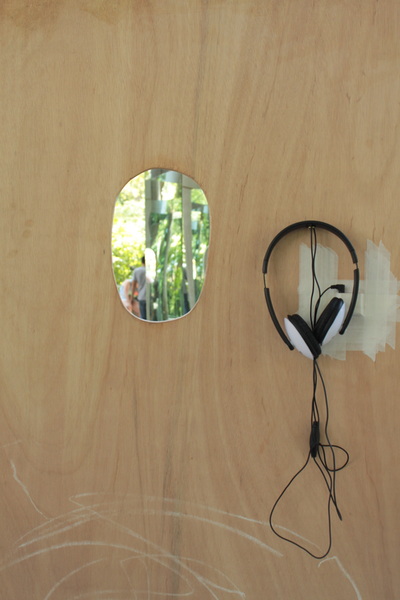 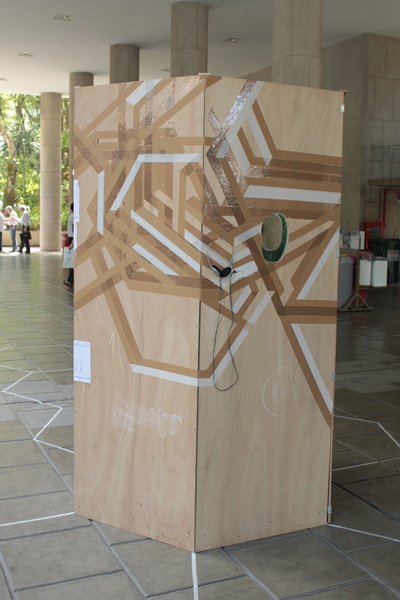 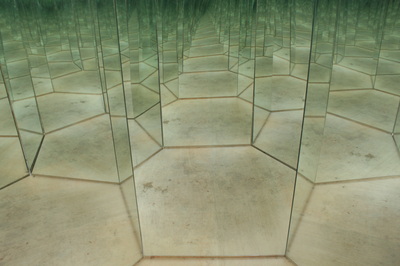 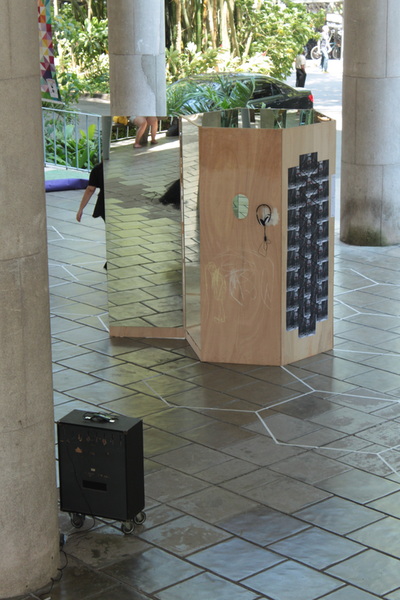 I had a reservation in a tattoo studio on April 16 2011. I wanted to do something connected to my daughter. I had to. I asked her to draw me a heart. Being a 2 and a half year-old at the time, she drew me the most beautiful and unexpected heart I had ever seen. I decided to tattoo it close to my own heart. That's when I chose the left hand side of my rib cage. As soon as I saw the finished tattoo and took a breath I realized it was a beating heat. Immediately I had the idea for a performance piece. This version was done on September 16, 2011. I thank Daniel Frony Baptista (Batata) for his generous offer to help me and also Ighor Costa, Ronaldo Salles, Bernardo Duarte and Fernanda.

Living in the Musicals

Luciana Palhares and Gabriela Bonomo collaborated as RotaH on three projects. The first is Living in the Musicals. A playlist was made available for download and a spot was chosen for the dance-a-thon. At the designated time all dancers pressed play and danced from the Marina to the Museum of Modern Art in Rio de Janeiro. 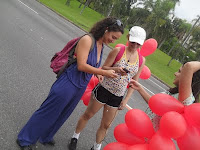 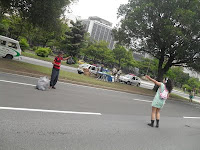 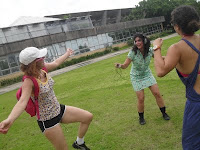 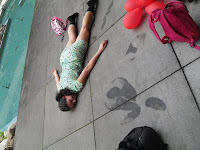 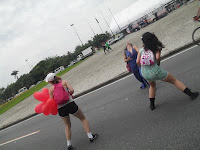 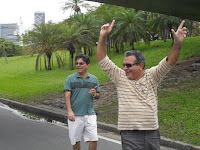 In a crowded nightlife scene in Rio, Luciana Palhares and Gabriela Bonomo would put out their stools and listen to passer-bys share their life stories through dialogue.  "When we listen to fragments of people's lives, how much of what moves us is actually the meeting point between them and us? We meet in the space between the fragments that are presented to us and the bridges built in these spaces stimulate us artistically." from the RotaH website. 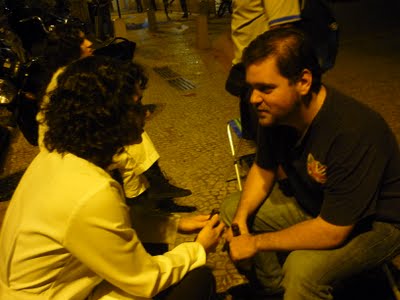 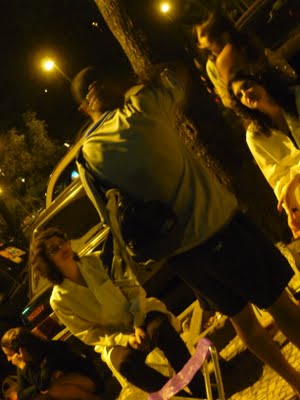 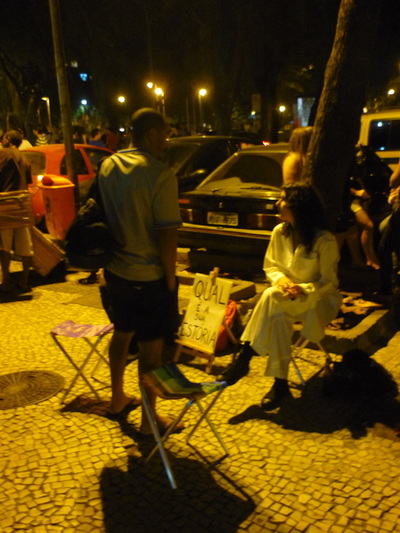 Blurting out in 5 minutes

Also a RotaH creation by Luciana Palhares and Gabriela Bonomo. A variation of "What's your story?", here we set out our stools to listen to people let out some steam or whatever they wished with the time constraint of 5 minutes. We were just receptors, not interacting verbally with the other person. 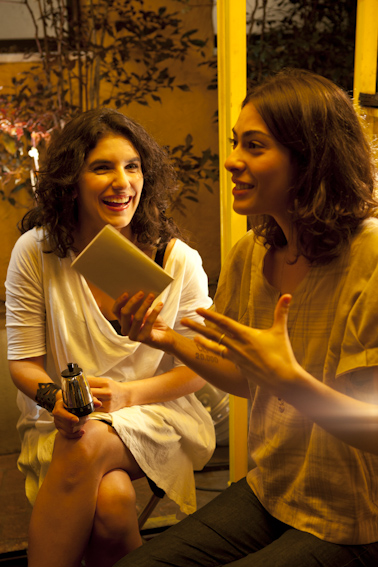 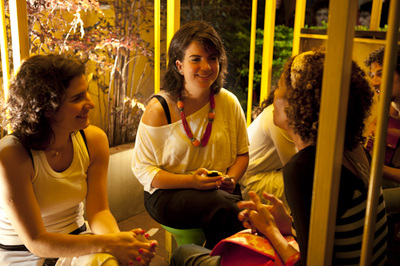 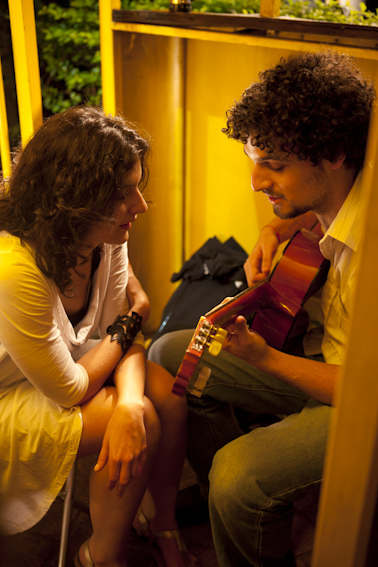 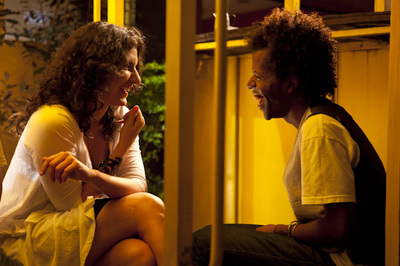